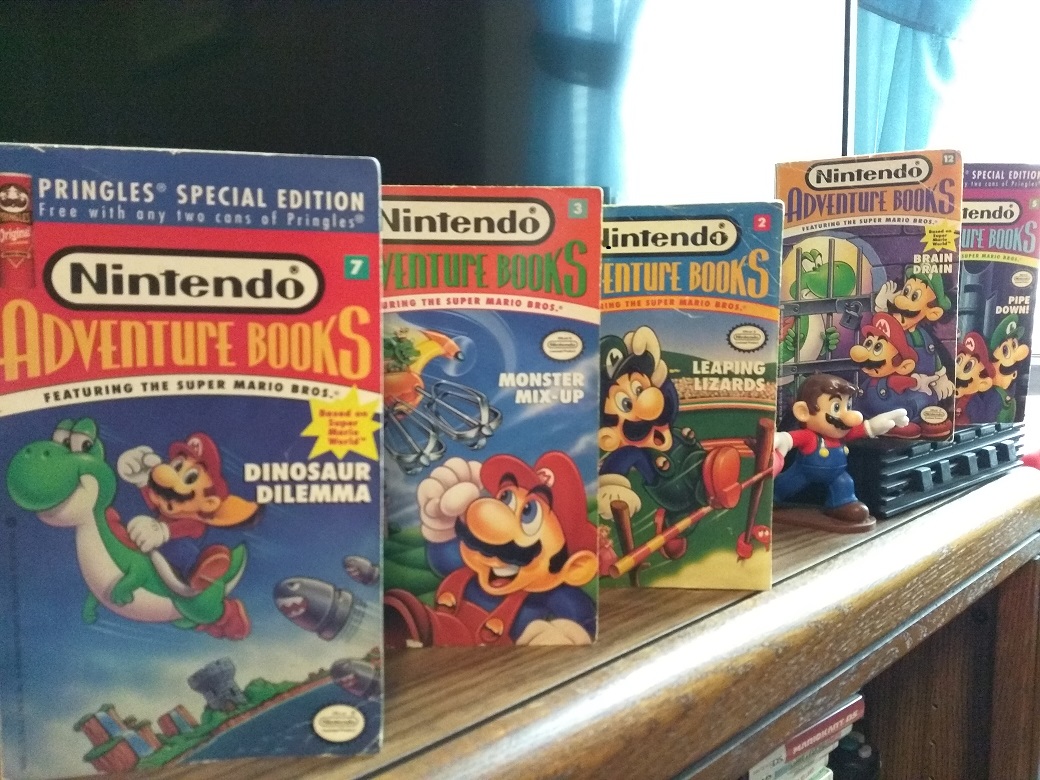 This article is a general overview of the Mario themed Nintendo Adventure Books, a more opinion based companion of my guide page. These books are a 1991-92 ‘Choose-your-own-adventure’ series based on mostly the Valiant Nintendo Comics System. The characters from the world of Mario except for two books based on The Legend of Zelda. As you will note on my walk through page for series, the quality varies drastically at times despite there being only two writers under pen names. Here we will focus primarily on the Mario themed books I’ve read. Let’s break it down. 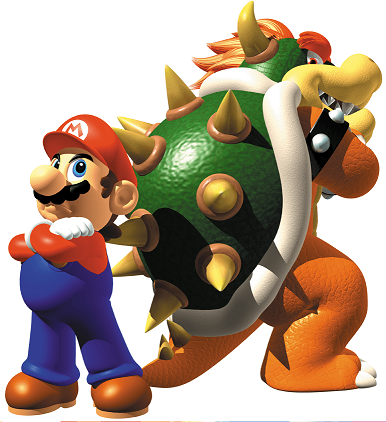 The tale as old as time, when Bowser created mutants out of his own minions and was defeated by a two headed giant Mario brother hybrid. What? Don't remember that?

Plots: This part is easy at least it seems. Give us an interactive adventure in Mario's world. Astoundingly all of the books are at minimum mildly interesting in their premise. Bowser creates clones of everyone, the Mushroom King is transformed into a rabbit until Mario and co can win a whistle in Olympic like games, various Bowser baddies are merged into freaky monsters, Mario and Luigi are sucked into dimensional portals based on retro games, tennis shoes with a mind of their own whisk Princess Peach away for a forced ballet tour, people’s minds and bodies are swapped at random in all the Kingdom, and once they'll need to explore Yoshi’s insides. Other books have a slightly more typical deal such as a bad guy putting Mario’s friends in danger or someone going missing. Really I have little issue here.

Characters: The best protagonist(s) is usually Mario and Luigi as a team as this paring allows for the best dialog, banter, and other action on the adventure. Mario or Luigi plus an other secondary character varies. It can work okay with Toad for instance but not so much with Yoshi who cannot speak in these books. The least exciting is usually Mario or Luigi solo. Without banter the writer has to struggle to find other ways to make the scenery or scenarios interesting. Bowser or someone related is almost always the bad guy though there are neat exceptions. Their evil plans are usually executed well enough as evidenced by the many ways the protagonist can game over and thus allow them to win. Often it's inexplicable how they come up with the wacky ideas, but that adds to the charm. Side characters are presented decently enough, often the way they might in comics. They sometimes have unique names and appearances, and for one-offs like Dr. Shrinkasaurus they seem to go all out!

Scenery: Stories take place either near the Mushroom Kingdom or Dinosaur Land. It all depends on how the writer handles it. At worst the book can make chapters sound like a bland advertisement for either Super Mario Bros 3 or Super Mario World. At best however both environments can be used creatively to give the reader choices to make and dangers to avoid. 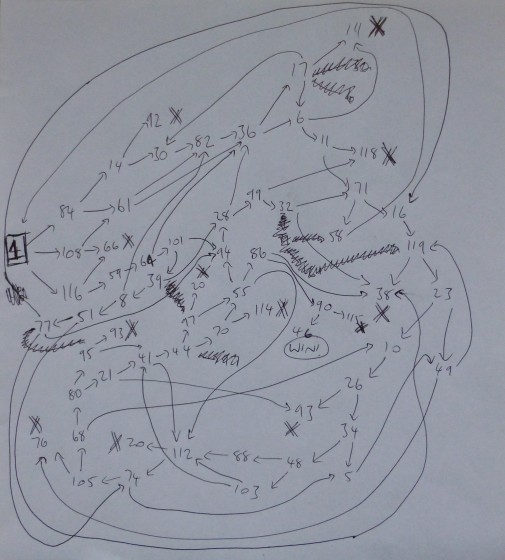 Structure: This can be a huge factor for overall enjoyment. Most books branch quite a bit at the start by design. The intro chapter eases the reader in and then features a puzzle that will either give a hint or present the first branching points. The middle bulk of all of the books will allow for exploration, but my only requirement is that it feels like it's an 'adventure’ and not Mario or Luigi randomly stumbling around. The book should give the reader a sense of progression. On different read-throughs you should ideally be able to encounter different things and still be able to reach the end. Understandably there will be paths that lead no where or to death and hazards but I still expect the book to make exploring these interesting. Let's briefly single some out: Book 3: Monster Mix-Up struck me as being aimless and difficult to navigate even as a child due to the scenery being generic and identical and chapters needlessly looping you. It was in fact a large part of the reason why I wanted to create a guide series. By contrast sometimes the tendency to loop is part of the design for better or worse. Book 6: Doors to Doom will require the reader to reread pages to complete the story.

Let me briefly touch on whether or not is is appropriate to revisit pages and recount their points as some readers question. Personally I do unless the book says otherwise. The book should be written in a way so that this doesn't cause issues. Does this make the score infinite then? Unfortunately yes. Pages that give awards “should” not be on any loopback, but the reality is that the writers don’t think that far ahead. (See Score section)

What about the finale? Many books become linear at the end. If the book was strong this doesn’t ruin it but if the book was mediocre.. There are however standout counterexamples that give the reader options down to the end nearly (Book 2: Leaping Lizards, Book 5: Pipe Down!, Book 12: Brain Drain). The pinnacle of this sort of thing is if the book allows the reader some room for error during the finale. For example if the reader did not do perfect on earlier sections but can scrape away a victory at the expense for not obtaining the high score (see Score section). This is rare in this series yet 'Leaping Lizards' and 'Pipe Down!' for instance pull this off. 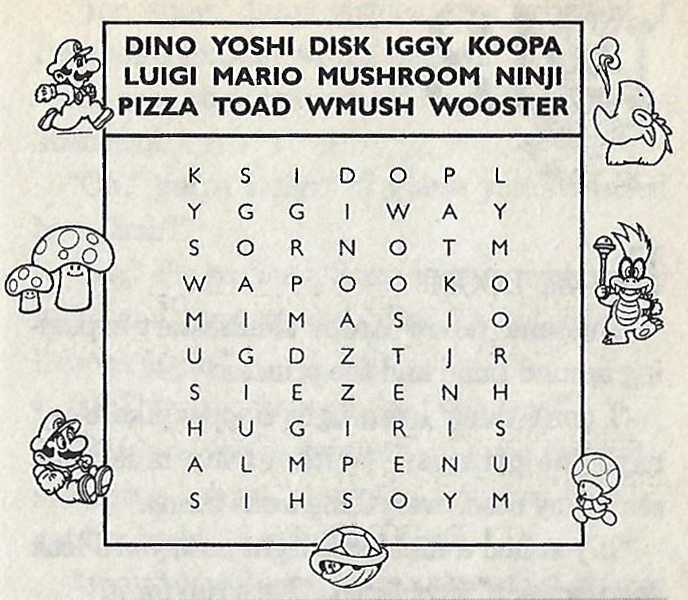 Seems simple but now imagine this without a word bank (Source:Mariowiki)

Puzzles: On my walk through page I compartmentalize the puzzles present in this series into seven main categories. Ideally the books should offer some variety but really whatever they do to the reader just needs to be fair and easily understood yet not too mindless to complete. Puzzles are supposed to help you in some way, whether allowing you to know what’s the better path to take or giving you something of value like points or items. Unfortunately even in the otherwise better written stories you might find puzzles that don’t give a definitive answer on what to do or offer anything. Often puzzles relate to the theme of the book but there are exceptions. I often penalize puzzles if I feel they expect too much work, often exacerbated by unclear and/or overly long instructions because this tempts the reader to simply not bother. Skipping puzzles even if out of frustration is also skipping an integral part of the series- at least to me. If a badly done puzzle is directly tied in to an item that’s needed for victory, that’s an even more serious issue. Some puzzles have variable scoring based on how well you do or what random path you take. This can be amusing when a really high or low score is presented as a page split option that is actually a red herring, leading to a ‘You can’t get this score!’ page. The assumption here is that they think you cheated or plain can’t count. Sometimes however a higher score is legit and you may wonder how you can actually obtain such a score. I don’t consider that necessarily an error but it can be frustrating. 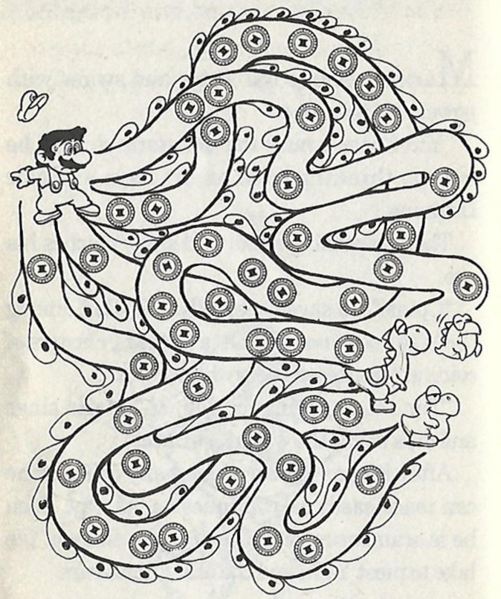 Be careful how you solve puzzles like this as it may affect if the high score is obtainable or not. (Source:Mariowiki)

Items: What role these play depend entirely on the book. Some books are very item focused, requiring one or more for competition. At worse a book will have the item buried on a page a that is hard to navigate to with little to no hints it is needed until it is too late. Other books feature items where necessity depends on your choices. I think a medium between the two is best. I think some sort of item(s) should be needed to encourage exploration in the book and emulate a game like experience, but it should be hinted at, not hard to find, and if you miss the item check there should be at least one opportunity to obtain it without a total reset. Some books have hazards which will remove or ‘buffet’ as I put it in my guides the player of their item. This can be detrimental if you cannot obtain it again and often leads to more penalties or a game over later down the road, though some books allow the reader to navigate back to it.

Another related quirk are ‘Items of Doom’ that will end the game by the reader utilizing it or even more egregiously by simply having it in their inventory. These are oft out of left field give give you a cheap feeling. I have one exception where it's kind of funny. Without spoilers (just see the guide for it) In 'Leaping Lizards' there are two items of this nature but only if optionally combined during the finale. You'll still regret it but you might laugh too! 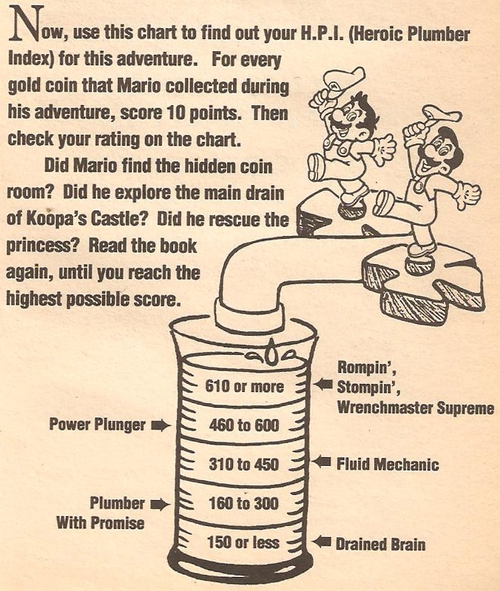 A typical score card, in this instance one that requires the reader to convert their coins to points.

Scoring: We can be quick here. Some books award coins that convert to points and other books simply award the points. You are given certain rankings on how well you do. It seems they came up with the ranking thresholds before the book was completed. In an alarming amount of books you will obtain the maximum score by reaching the end, whereas in other books it seems nigh impossible to get the highest score no matter what or at least not 'naturally'. This brings us to the 'should you reread pages and farm points' issue mentioned above. You can never be sure if they really intend that or not. We're not done here. Most of the lower scores can be hard to reach as well in an odd twist. I suppose if you tally your score on failed game over trips in the book those lower scores will come up, but often pages that advance you reward your score and pages that don't kill you so it creates an interesting self imposed challenge I'm sure no one involved in the making of this series ever thought about. 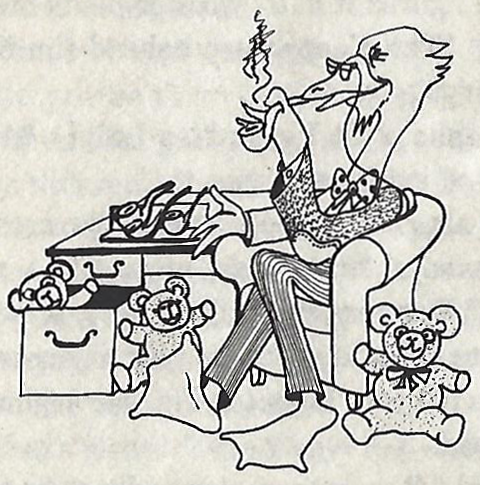 The quality of some of the 'original' artwork you can find in the series. (Source:Mariowiki)

Illustrations: Art in the books are usually taken from official game artwork but frequently there are custom edits and completely original characters and settings. Aside from the fact that the incorrect character may be shown compared to what the page's text describes, I rate this satisfactory overall. Some are more basic than others but they have personality. 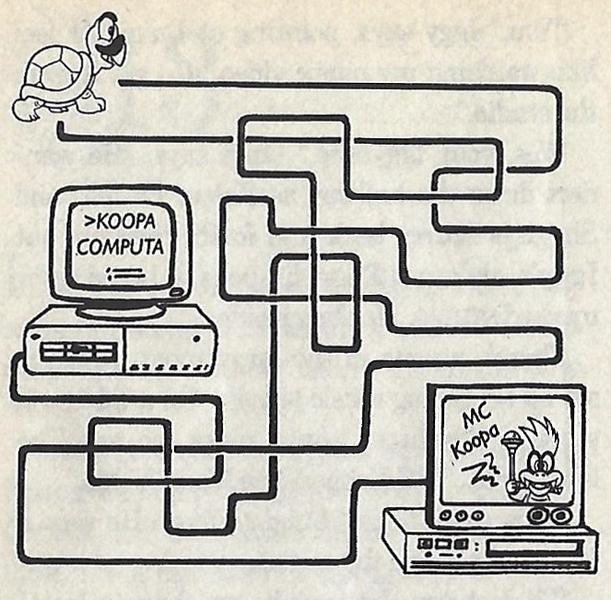 -Demian's Gamebook page here and here: These pages cover briefly all of the books with Demian's and a few other's opinions on them and some of their scores. Feel free to compare to mine though I suspect our methodology differ just a bit. The second page contains scans of some of the score cards and some visual differences between the American, Pringles, and British versions of the books.

-Mariowiki Nintendo Adventure Books entries. There are unique pages for all books as well as entries on some key items.

-Spectrum of Madness blog. More opinions on the books, going just a bit more in depth than the others and rating them somewhat.

-Gamesasylum coverage and map. Brief coverage on the series but also the home of the only map of these books aside from my own!

-A TvTropes page that will ruin your life! Has spoilers, I mean.. if you care.

-Archive.org scans of Double Trouble. Some scans are a little grainy but it can get you through it.

-Imgur album photo scans of Flown the Koopa. The resource I used to create my guide.