Interesting Things in Super Mario 64's Manual and Beyond

Everyone knows about 1996’s Super Mario 64, the best seller and revolutionary N64 game. While other more talented people have analyzed many aspects of the game, fewer have covered its manual and the little details within. Nintendo hosts a pdf of the manual on the website but the overall layout and even a few images are altered. Here’s a link to that (leads to Nintendo UK) All scans from me. I know they are ginormous but the quality won't get higher. Enjoy.

“Will Princess Toadstool be kidnapped again? Is there no end to the constant feuding between Mario and Bowser?” 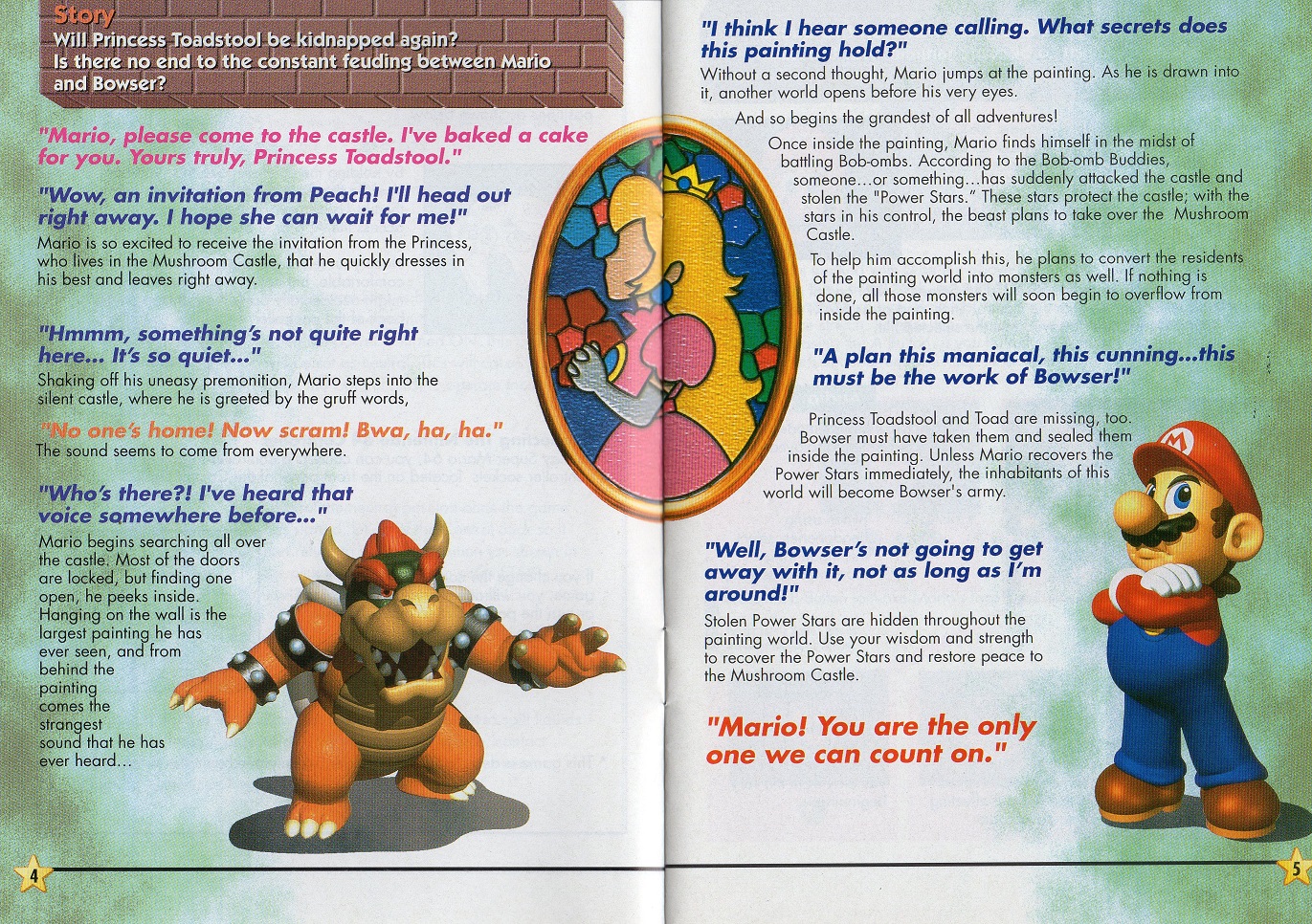 We have a page dedicated to story. We don't get that sort of thing anymore do we? There is a summary of what Mario experiences after getting Peach’s invitation and we keep up with him until he enters Bob-omb Battle Field. Bowser’s plan is to convert the residents of the painting worlds into monsters that will eventually overflow from the paintings. So of note here, there really is no explanation of why Peach has a magical art gallery in her castle. Then again this game debuted Peach’s Castle and it could have been that way forever. Who am I to judge. Power Stars Bowser stole are stars that protect the castle. So they didn't do their job? You must collect them to save the castle, presumably Peach too of course and the countless toads that either disappeared or were transformed into holograms. Take note of the numerous quotes from Mario himself in the intro. Older games sometimes did such a thing, like Super Mario World’s manual.

The rest of the manual talks about the controls very thoroughly, which is justified with the new exciting control stick and what not. Here are some notable tidbits: “Other ways to fly” is a section in the original that the pdf version lacks. It mentions that Mario can fly by stomping on special enemies then jumping or being carried by the wind. Possibly the pdf omits that because it’s slightly misleading. Mario spinning off of enemies like Spindrifts and plunging into the wind on courses like Tall Tall Mountain aren’t exactly the same as flying with the wing cap. 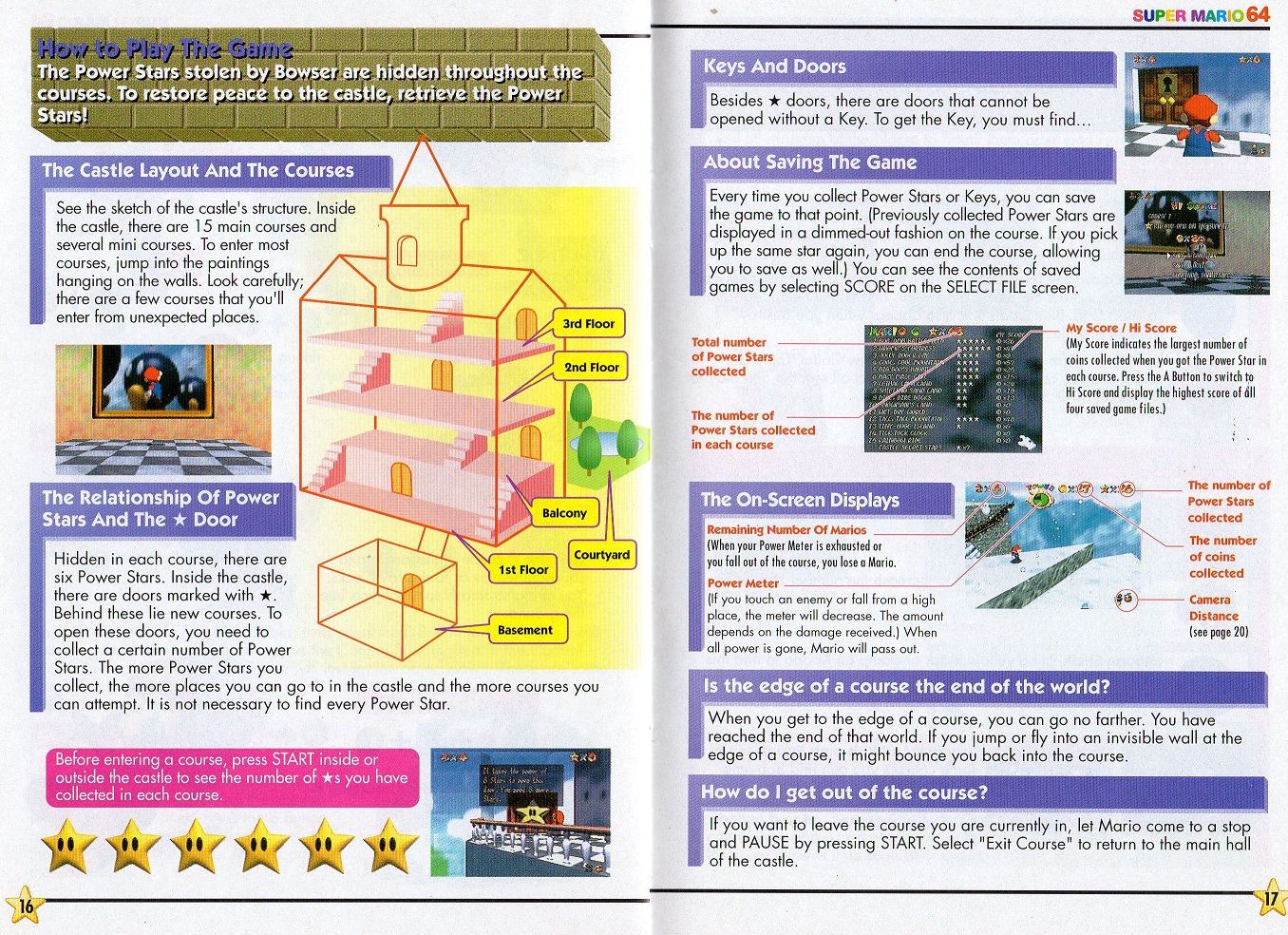 “How to play the game” is another altered section. The original as pictured has a stylized image of the castle’s layout. The text is the same but in the pdf version the castle diagram is replaced with an ingame and low poly screenshot of the castle from an overhead view. Very odd, because this demonstrates nothing about the layout even though the unaltered text tells you to “see the sketch of the castle’s structure”. Someone skipped a proof read. 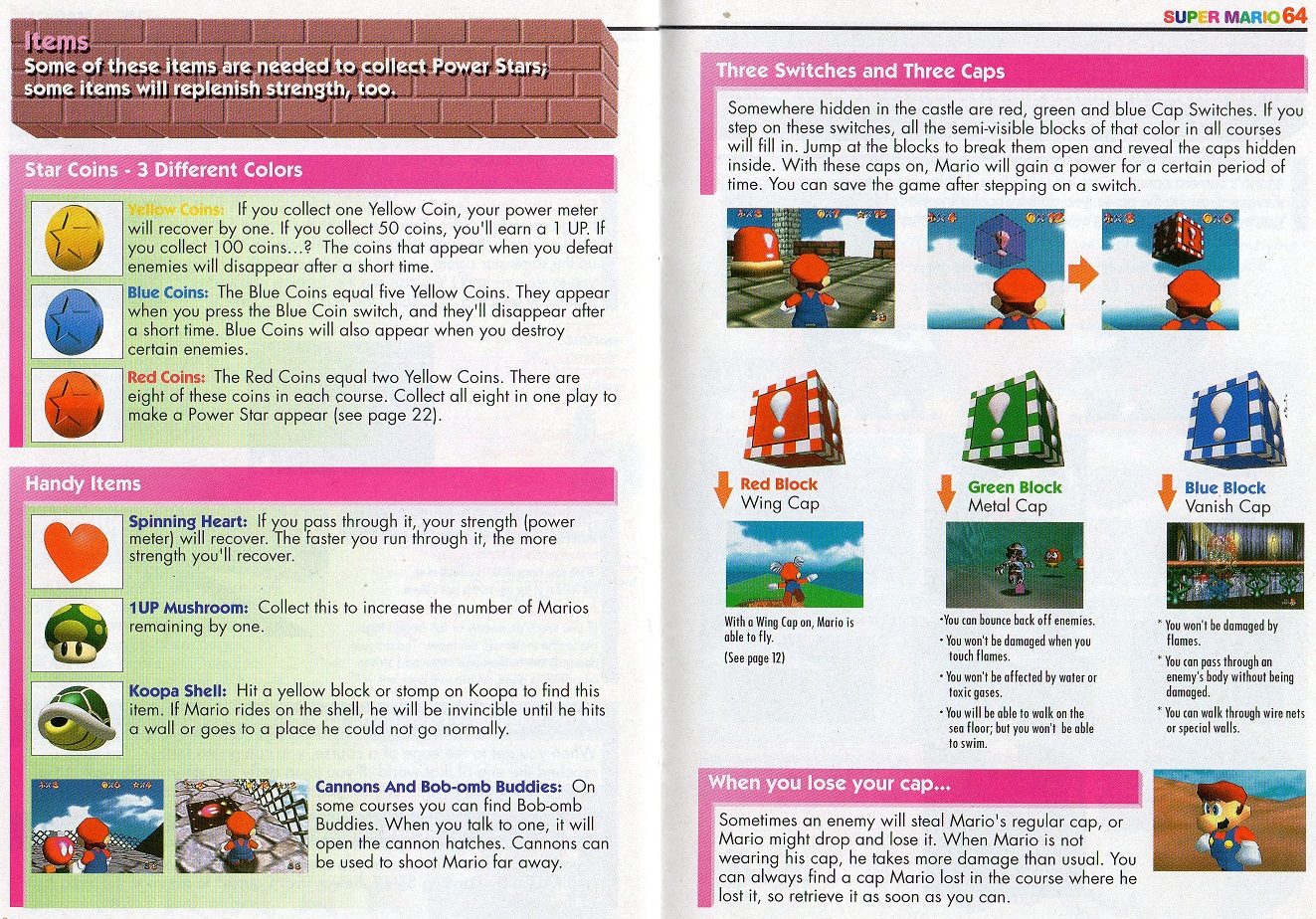 The original manual has an items page omitted by the pdf. It covers the coins and also explains spinning hearts, 1-ups, koopa shells, and more. The part about the colored blocks and caps are in both however, explaining how they work. A misconception I think is that some think the metal cap is bugged because you can take fall damage. Looking at the text however it never claims that Mario is invincible with the cap on, just immune to enemy hits, gases, and flames. 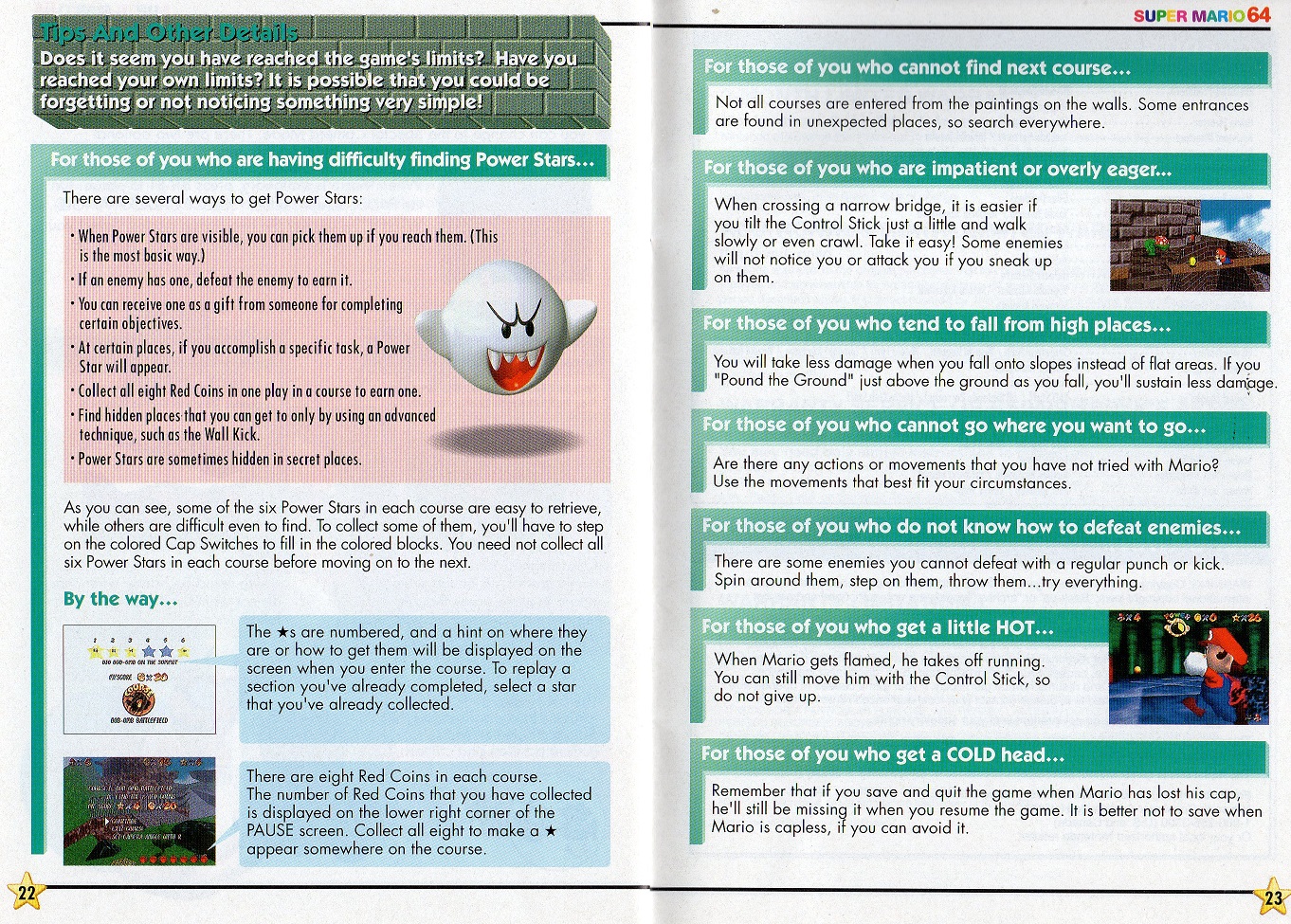 The Camera operations is reduced a lot in the pdf with it only explaining the c-buttons but not the modes to change from the pause street. Only the original guide has a “Tips and other details” part. As shown it mentions how to collect stars, the red coins, the fact that some level entrances are NOT in paintings, that ground pounding if falling from far can help, and etc. Some of these tips are in the game its self, but it’s nice to have it all on paper. Why the pdf changes things I’m not sure. Truncated manuals are a little more justified when we are talking about the kind built into Virtual Console rereleases but as far as I know the pdf in the link is for the physical copy. Perhaps being a UK version makes a difference? 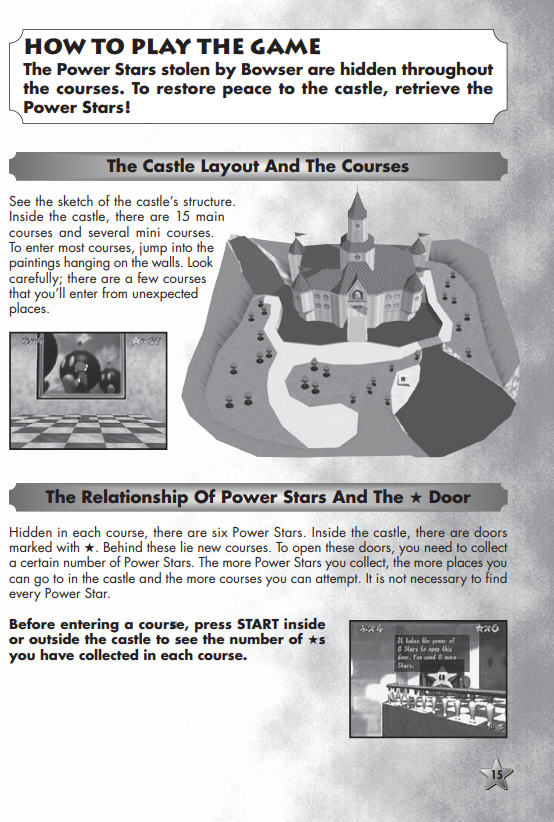 No, not the stuff you find on any other webpage about Super Mario 64. Here's some stuff no one else has cared enough to note:

-That time Bowser turned Peach's Castle into an art gallery..

Super Mario 3D All-Stars: "Princess Peach has invited Mario to her castle to enjoy some cake! On his arrival, he's greeted by an eerie silence...until Bowser's laughter echoes through the halls. Thus begins an adventure to rescue the princess by exploring the magical worlds within the castle's many enchanted paintings. This first 3D action game in the Super Mario series launched alongside the Nintendo 64 system. The introduction of the analog Control Stick set a new standard for later games in the series."

As you see with Nintendo's modern day description It's common knowledge you jump into paintings to enter levels in this game. Just how many levels are actually contained in paintings though?
A PAINTING (not a wall or portal anything else):

Hmm, that's ten nine of fifteen and that's not counting the Bowser or sublevels. What gives? Dire Dire Docks is considered a painting from some but I'm not so sure. It's an moving liquid portal in my opinion, the same as Hazy Maze Cave. Snowman's Land has a asterisk because its painting is invisible, but the mirror reveals it's there so I count it as existing even if it's a repeat of Cool Cool Mountain. Maybe that's why it's invisible? Peach realized she ordered the same one twice?
What of everything else?:

So only slightly more than half of this game is jumping in paintings or even less if we don't count Dire Dire Docks and Snowman's Land. Now you know!

What does that mean? Just world building. In normal circumstances we can presume Peach's bedroom or at least personal space is up on these higher floors. Logically don't go stomping or being loud in her halls. It's no secret or anything. The DS remake rewords this dialog again to prove it's nothing really.

Again this fountain, sometimes called 'Eternal Star fountain' or the the 'Nintendo is trolling' fountain... It means nothing. Really. You know how something becomes so legendary that retroactive or completely made up meaning is given to it? In Mario Odyssey they put a moon there though. So there's that.

-"Mario it that you??? It has been so long since our last adventure! They told me that I might see you if I waited here, but I'd just about given up hope!”

Yoshi utters this during his only cameo in the original game on the roof. The broken English at the start is often considered a mistake, but Yoshi speaks like this in a few other games so I do not think this is out of character really. Of note here is that the last adventure he refers to is Super Mario World. Basically any games in between then and now weren't canon I guess! Who was this person who told Yoshi to wait? The Lakitu Bros?