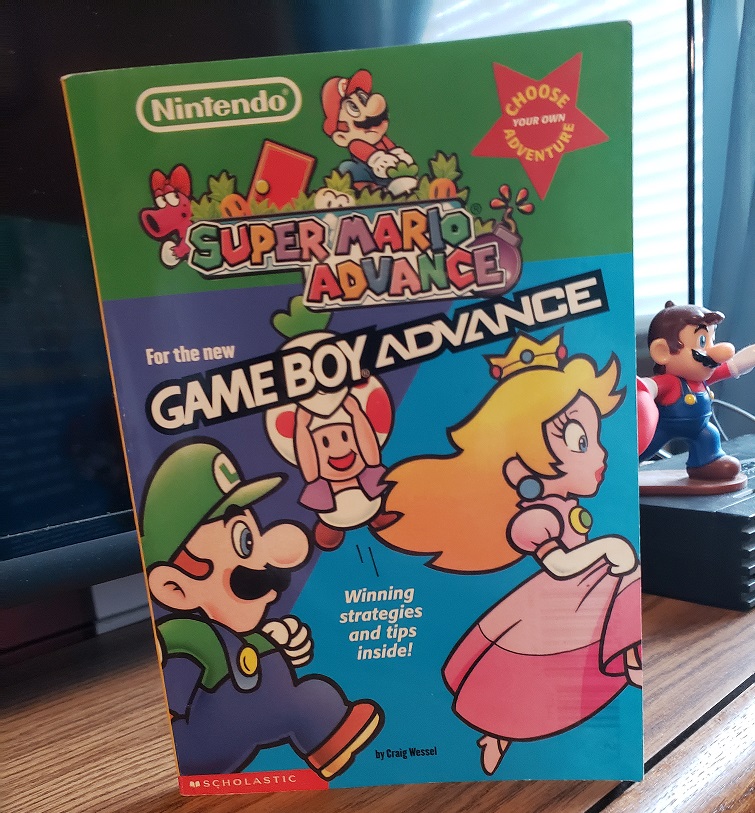 This is a Scholastic book from 2001 based on the new Super Mario Advance game on the Gameboy Advance. Written by Craig Wessel, there were three others in the ‘Choose Your Own Adventure’ series, based on Zelda and Wario Land. In addition to featuring a tale based on the game’s events, the books doubled as a basic guide. The book is not however a walk-through but I’m going to give you one! Of the CYOA part.. not the game. Some fans might remember the Nintendo Adventure Book series from a decade before so how does this fare? Continue on.

Story and characters: The book closely follows the story of Super Mario Advance 1, which of course a port/remake of Super Mario Bros 2. Mario and friends are stuck in the dreamworld of Subcon where evil Wart has wrecked the native’s lives. We start with Mario who has a dream where the Subcon people request help. He then wakes up for a normal picnic with Luigi, Peach, and Toad- or so he thinks. He’s still actually in a dream as you’ll see, regardless you don’t want to wake up before Wart is defeated.

After the short into page you take control of either Mario, Luigi, Peach, or Toad. After a while they meet up again and tackle the rest of the book as a team. Allowing you choose the POV is interesting at least. The enemies and occasional bosses appear with careful note of how to defeat them in the actual game. Various locations from the game are heavily featured as well. You confront Wart at the end and kick his butt. You wake up and it was all a dream! Again! Or was it?

Structure and writing: This is where things plummet even compared to the weaker Nintendo Adventure Books. The choices you are allowed to make are the most rudimentary if even that. There are no puzzles and little logic to what’s a good choice or not. Of course, it is not super easy to game over either because there are only four bad endings for each character where they wake up prematurely and there are only slightly more than that many paths to said dead ends. The book mostly reads like a drab written transcription of someone’s let’s play. Because your character acquires the guide book immediately, they always know how to handle each danger, even bosses which would have been a great opportunity to perhaps test the reader’s knowledge of strategies that apply to the real game. As you’ll see in my walk-through there are lots of what seem to be an alternate choice that quickly meets up to the main path. Since the real game often involves doors and warping, that just allows them to place your character literally anywhere at any time and sort of cheat you to where you need to be.

Each character does see different things and at least encounter the different bosses and their location has a different theme, but once they meet up the story is linear again and the lengths of their adventures aren’t exactly even. There is a point where it seems you can split them up again but that’s a fake choice because only once character will complete the objective and it’s not even a dangerous spot either because you won’t get punished for choosing wrong. There is one part of Wart’s castle that is dangerous but the choice has no hints it’s bad. Overall, the Choose-Your-Own-Adventure parts are weak.

Do the characters shine? Not really. There aren’t any funny lines or banter, partly because the group spend time away from each other at the start, but it doesn’t pick up much later either. Birdo when you find her has lines of a basic nature, but the other foes you encounter have no trash talk for you. The most interesting thing I can say that happens is that a character you wouldn’t expect single handedly beats Wart.

Illustrations and other features: A cute feature is that the POV of the page is represented by a character icon and so when everyone is together you get all four portraits. There are very rarely small game screen shots or stock art on the main pages. The middle pages of the book are in gloss color but they only contain a short quip about the characters or just more screen shots. The back pages are the Travelers Guide to Subcon pages explaining again the characters but also the items and enemies. How helpful this is is debatable as there are no images to accompany the descriptions and this info is just in the manual mostly anyway.

Overall thoughts: A book for die-hard Mario written media collectors only. None of the liveliness of the Nintendo Adventure Books is present and the CYOA aspect is as bone dry as it gets. I understand that their secondary goal was to have the book also be a guide for new players of the game but there was plenty to do with that. There could have been puzzles or choices to make that teach you about some game mechanics. There could have been an item check that can help your characters though obstacles. There could have been options with the boss and enemy encounters of which there are many. Instead, all of those events occur on autopilot, leaving you like you are reading a normal book. A boring normal book. The plethora of missed opportunities and the nearly automated adventure leave me no choice. 1/5 stars.

'Fun fact': The back cover says there are more than one ending. Sure if we count the four additional bad ones but that’s only a scant five endings in all. Furthermore, the bad endings taunt you by saying that you’ve reached the worse possible ending for your character. That’s false because each character only has ONE personal ending. Even later when the group meet up, if you game over you are sent to a character (Mario’s to be exact) personal bad ending.