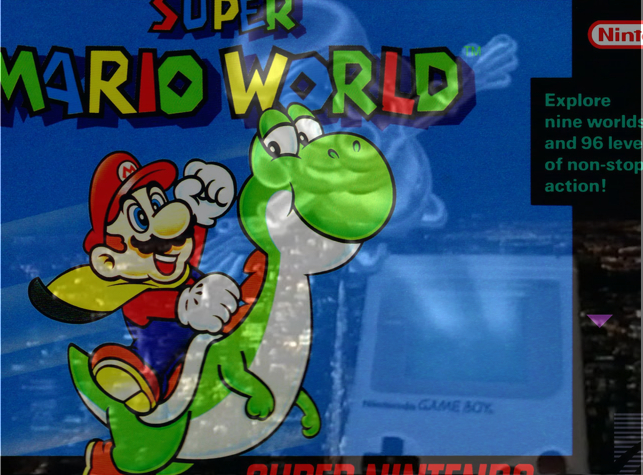 -Super Mario World for the Super Nintendo Entertainment System was released in 1991(USA) as a sequel to 1990's Super Mario Bros 3. Here we are going to compare it to the 2001 port Super Mario World: Super Mario Advance 2 on Game Boy Advance. This idea spawned from me owning the manual to both versions and also a gamefaqs linked here. Because that guide is well done and covers a lot, our main focus will be changes in the manuals! Turns out they changed a lot more than you’d think.

-The GBA port of Super Mario World’s manual rewords the story found in the original manual. The original explicitly states that SMW takes places after SMB3.

-The original exposes the Mario bros as slackers. It states that they went to sleep when Peach disappeared. The GBA version omits that. In the original, Yoshi calls the turtles monstrous. This is omitted in GBA, I guess the Koopas weren’t so big after all. The next line of dialogue in the original is spoken by Luigi and Mario nods in agreement. The GBA version makes this sound like normal narration and never mentions Mario or Luigi’s response to Yoshi. The Koopalings are called the “Krazy Koopa Kritters” but the GBA calls them “henchmen”. The GBA version ends there, but the original goes on to have Yoshi first introduce the Cape to Mario and the narration explains some game details involving exploration. The map and enemy list isn’t in the GBA manual but rather a separate foldout paper and the descriptions are changed. Let’s move on to that.

Characters/ Denizens in/of Dinosaur Land The SNES original has this in the manual under “Characters in Dinosaur Land”, the GBA remake has it in a separate mini poster titled “Denizens of Dinosaur Land” which also has the map on the backside. Interestingly, the enemy descriptions are rewritten. 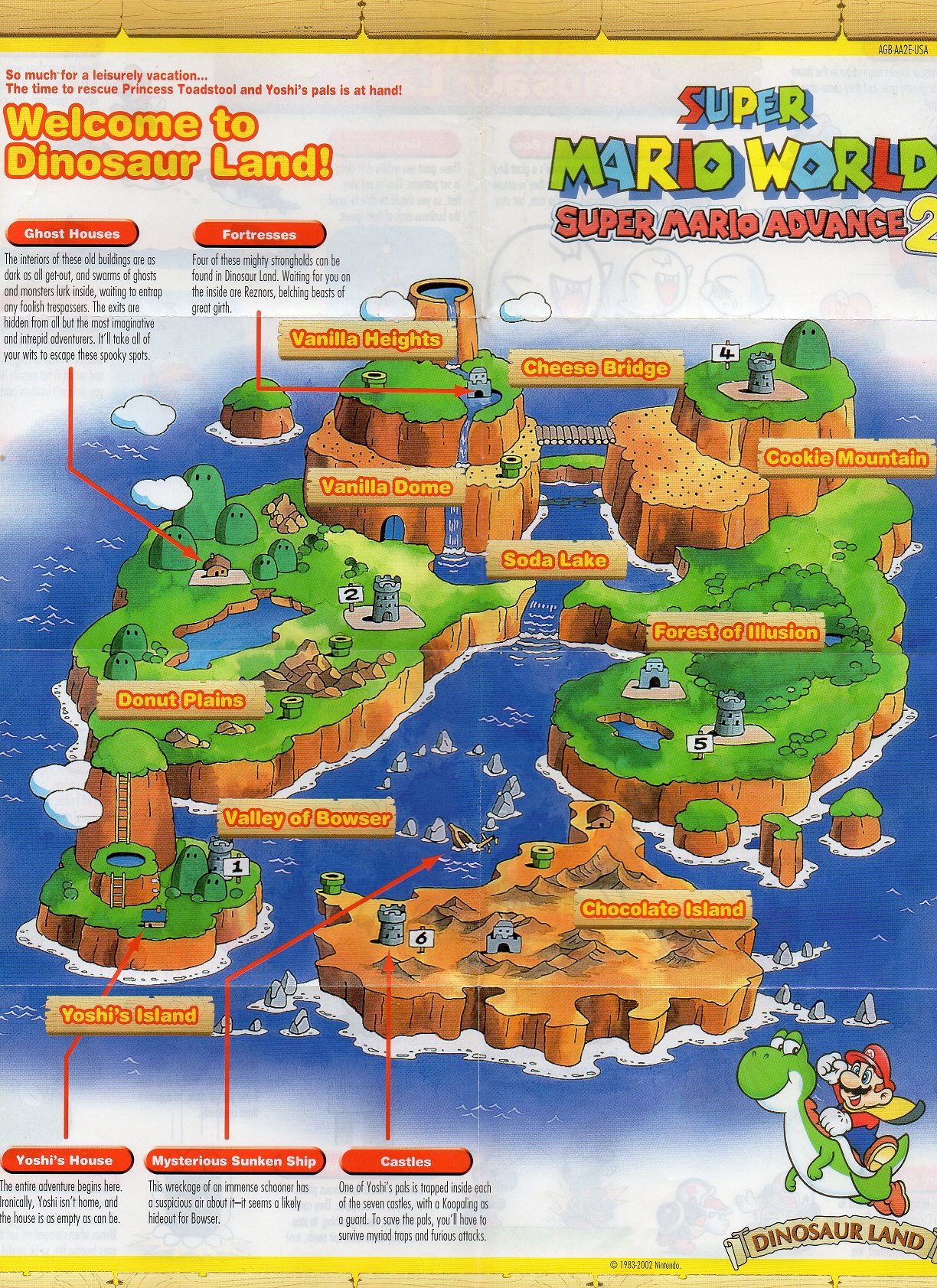 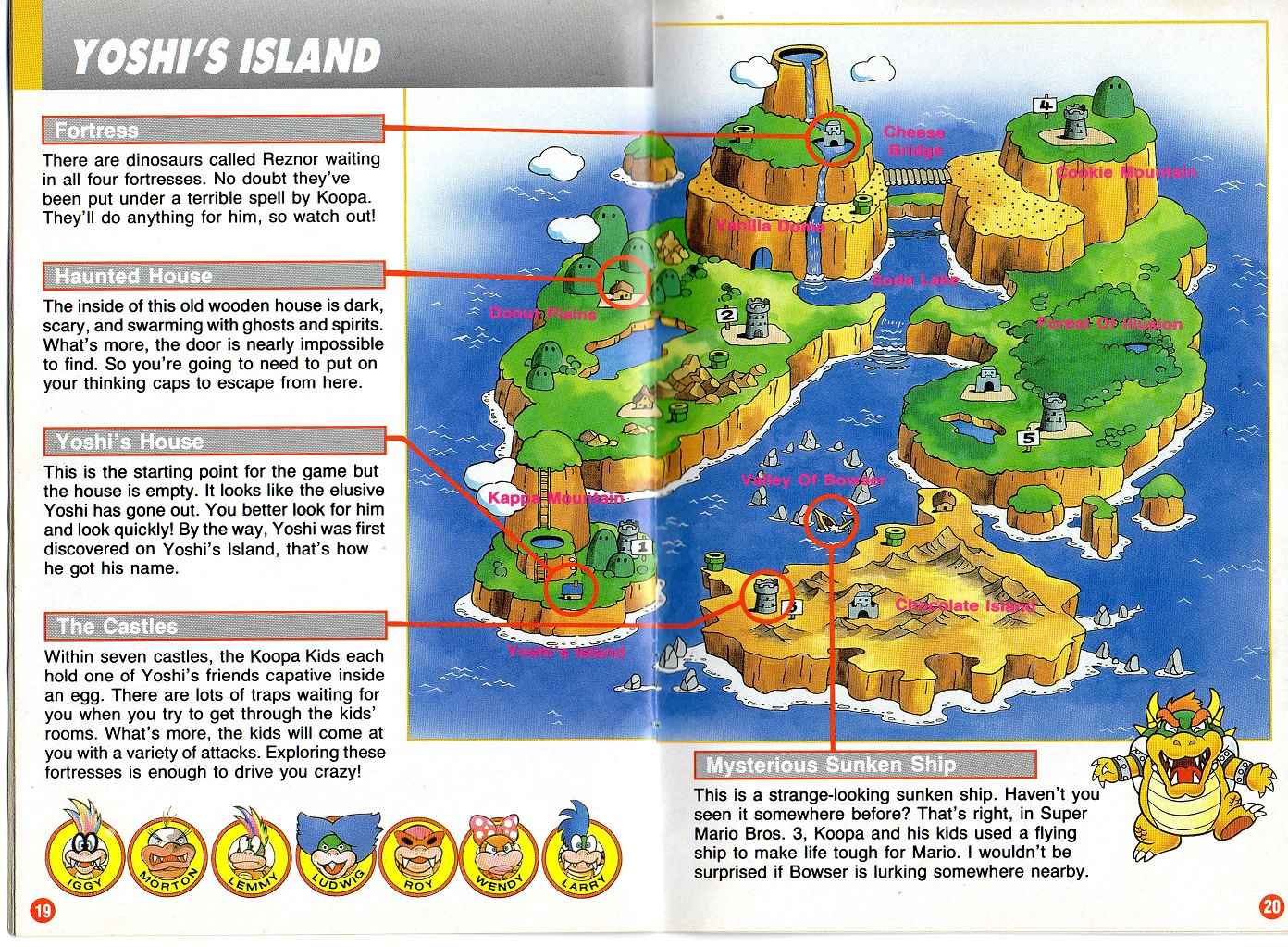 The Map of Dinosaur Land As mentioned before, the SNES manual has it on pages 19 and 20, but the GBA in smaller form factor is on a separate paper that folds out. This provides a nicer view to the original but the descriptions of the locations vary between version. Provided are scans of the fold out on top and the SNES manual under. Notice how the GBA removes 'Kappa Mountain' yet adds 'Vanilla Heights'! Anyway-

In General: You take one less hit compared to the SNES version. This is like the US version of Super Mario Bros 3 or any modern Mario platformer where you take one stage of damage by enemies. The original game and the All-Stars version take the Japanese SMB3 approach where any hit makes you 'small Mario' regardless of the power up you had. Having this extra hit certainly counts during certain sections of the game. It also has the unintentional benefit in that your reserve item will not be automatically deployed after a single hit, an annoyance in the original when you perhaps wanted to be small and then use an item later. You have a score page accessible via 'select button' to keep up with all the level exits you've found, dragon coins, and which bother you beat the level with. There are more dragon coins in this game.

Controls: The control scheme of the games differ so I’ll be brief. The GBA has less buttons so one shoulder button does the spin jump and the other scrolls the camera. Other than that the games don’t feel that different direct movement wise. The original calls it ‘Special Mario Controls’ but the GBA ‘Special Plumber Power’. Both have a chart of how power up affect Mario but only GBA shows how the damage works. This is a justified because in the original one hit turns you into small Mario regardless of what you had. The GBA is a little abridged in other areas, with no mention of Keyholes, Star road, or Switch Palaces, but it does cover additional items and blocks. Jumping board from SNES becomes Trampoline in GBA. Yoshi’s Wings make you ‘fly’ in SNES but ‘warp’ in GBA, which is more accurate actually. (These are referring to the yoshi wings that take you to a bonus area as opposed to the blue shell powerup kind). Switch blocks/ P-Switches are only mentioned turning blocks into coins in GBA whereas SNES mentions ‘objects’ which spoils the fact that silver variants transform enemies. Because Luigi has his own characteristics, the GBA version has a short ‘Luigi Lore’ part. He controls very floaty now, but also affects how Yoshi behaves, coin blocks, fireballs, etc. They went out of their way for it to be more than just a palette swap.

Multiplayer: The GBA version has the Mario Bros arcade battle minigame like the Mario Advance games has. The SNES version has a two player mode for the main game where the player cycles between Mario and Luigi. The GBA lacks this but you can swap Mario or Luigi on the map screen.

Saving the game: Gets its own section because it’s pretty big. The SNES has a battery backup which is great because without shortcuts this game can need it. In the original you save by beating a fortress or a ghost house or a switch palace. You can replay some of those to save again but you cannot save otherwise. The GBA is a portable game and revamps this like other games in the Mario Advance series. You can save anytime, even in the middle of a level though you’ll start outside the level. Very convenient.

Visuals and Sound: The sound takes a downgrade due to hardware restraints. There is now voice acting however for Mario and Luigi. The gamefaqs linked can go further with that. Because the original GBA does not have backlight, the colors are very bright. Of note Luigi's sprite differs but this distinction actually came from the All-Stars rerelease of SMW. With all of that said, the sprites are still a little different! See below..