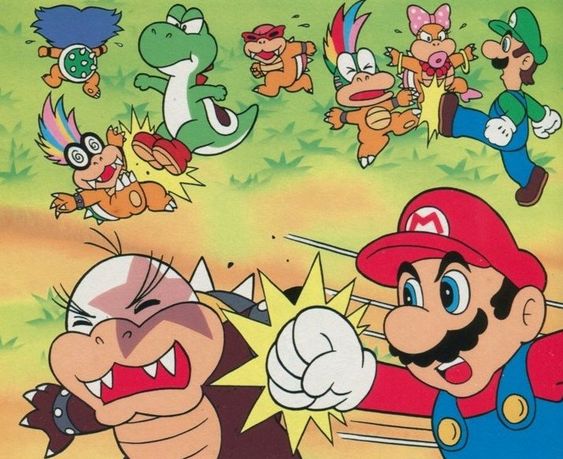 Enjoy a second collection of Mario Oddity articles, even more flamebaity than the other one! Updated regularly! Enjoy.

In Defense of Super Mario Land

Super Mario Land: It’s a 1989 launch game for the Gameboy! I like the unique themeing, concept and some of the ideas here. Yes the game overall is mediocre in context of the entire series, but rather interesting and important historically. We must remember how early of a platform game this is for Mario. There was SMB 1 and…. SMB 2! That’s it at least if you were American. So there isn’t a whole lot of precedent set, compounded by this being a launch title for the system. With that in mind I respect it for what it tries to do, bring Mario platforming to your handheld. Of course the limitations show in some elements like the visuals and game play mechanics. For instance there are bombshell koopas instead of koopa troopas because they didn’t want to program shell bouncing. The other enemies also have odd untranslated names which would never fly now. But again, we can forgive some of this for the time. The music is legitimately good. We also introduce Daisy who is infamous for several reasons. Despite it being a main series game, Daisy is regulated to spin offs, entirely unlike characters like Bowser Junior or Rosalina. Having an original villain is neat from our modern perspective where some character choices are cliche, but at the time it wouldn’t be too weird to introduce new characters for new Mario games. I think it’s worth a play through to experience a different environment and some of the unexpected gameplay changes they throw at you. It’s a short journey, in fact that was a complaint back in the day- but leaves you no excuse to not check it out now! 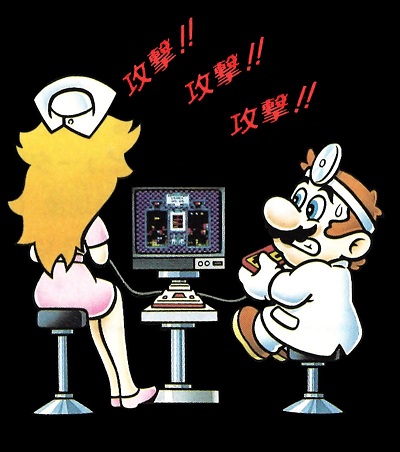 Not an old man rant, mostly because I'm not a man nor old..Oh but if I were..

Nintendo is and has always been a company of quality, so what am I talking about? This will not be a big rant or me drinking the haterade, rather a nuanced take I hope you will be open minded enough to listen to, based on general observations as I have grown up with Mario and Nintendo since the early 00s..

So first of all, what is that 'Super Mario Galaxy 2' effect? Let's go back to the first game from 2007 and all of it's success and critical acclaim and all of it's original creative ideas. Now think about the sequel from 2010. What comes to mind? Personally I thought it was fun to be honest, but something else about it can't be ignored. It's basically on-disc DLC for the first game. The developers as much as admitted such, and that's just fine really. People love it as much if not more so than the original because of the extra ideas they throw into a familiar game. Let's look at it a little closer though. Instead of the Comet Observatory or some equivalent being the bridge to each 'world' or galaxy, you move the Starship Mario on a map straight outta NSMB. What little bit of background story the first game afforded isn't even attempted. Some of these changes can be interpreted as quality of life alterations, such as allowing Luigi to be playable without a tedious journey, so not everything I'm pointing out is negative. This game is only the proto-example of the trope above. Only a glimpse of what was to come. That brings me to this:

The 'Super Mario Galaxy 2' effect is when a sequel or next game in the series is polished and objectively 'better' in ways that are dazzling yet more shallow than it's predecessor, sometimes inexplicably inventing problems or at worse removing what made series popular with fans.

Now before I go any further, some of you may read some of these nitpicks and see little wrong. That's the point. It's Mario. We're not discussing a bunch of 'garbage' games. None the less, put all of them from a particular time span together and we get a worrying picture. I believe the Wii was the last ‘uncharted’ era for Mario, and even then there were signs of the times, a lot of sequels, or series continuations there as well. The reason I don't feel these apply to the above however, is that while incorporating what many feel are gimmicks like motion controls, most of those games continue the trend of going bigger and better in every way. Remember, it's not the fact that it's a sequel that's the issue. Now contrast WiiU era and even beyond, where unfortunately we get what feels like rehashes, cookie cutter entries, or content starved continuations of much beloved sub-franchises..

The common link in the chain of mediocre games is this: When something is GREAT, or even just 'okay', Nintendo with their great money sense (not sarcasm) milks it to death and gets away with it most of the time too. Super Mario 3D Land was a great game and 2013's 3D World as well, if unnecessarily padded at times.. Remember what I said happens to good stuff? We'll come back to those.Mario Kart 7 is well like by many , but it was rushed out the doors. I talk about it more here. Paper Mario had it’s biggest and most divisive bomb in 2012, Sticker Star. It’s never 'fully' recovered since. Mario Party was already getting shaky with some, but nothing ruffled feathers like Mario Party 9 in that same year. Again the franchise has not fully recovered. New Super Mario Bros 2 is often called the weakest entry. Guess what? 2012. See a pattern? Mario Tennis Open? More like 'Mario Tennis Empty of Content'. New Super Mario Bros U was better, but has also been rehashed twice since. Yoshi's New Island wasn't loved too much in 2014.

It keeps going.. The original version of Mario Kart 8 from 2014 had more content than & MK7, but was lackluster enough for them feel the need to revitalize rather than simply port it over in 2017 for Switch. MP10 refused to let go of the car in 2015. Then there's the branching out. Oof. Onto mobile games, apps, other gimmicks that are shallow at best, even compared to the most shallow console releases. I'm done. I'm not going to beat up on every game ever here. Again, don't get too wrapped up in the phases I've used above. All we are describing is a mild yet insidious decline in the quality of Mario games and, some ways, our tolerance for it.

Exceptions: The Mario golf titles are more solid, at least compared to what's happened to a lot of the Tennis ones. Mario Party Superstars is one rehash that makes some sense to me, pulling from several generations back as opposed to all of the WiiU stuff being dragged onto the Switch instead of newer ideas.

So are all Mario games bad now? Of course not. There are glimmers of magnificence in this era, where you can really tell they 'got it' and captured the spirit of old Mario. Mario Odyssey gave me a 'I really wanna explore everything' vibe I hadn't gotten in a long time, particularly because the Galaxy games (which are good mind you) chose to railroad the adventure considerably. I had some issues with Paper Mario Origami King's gameplay, but from a writing perspective, it's undeniable they were trying to write the most genuine and witty way possible with their strict characterization restraints. Also to day, it's the best implantation of of the new Paper Mario style. 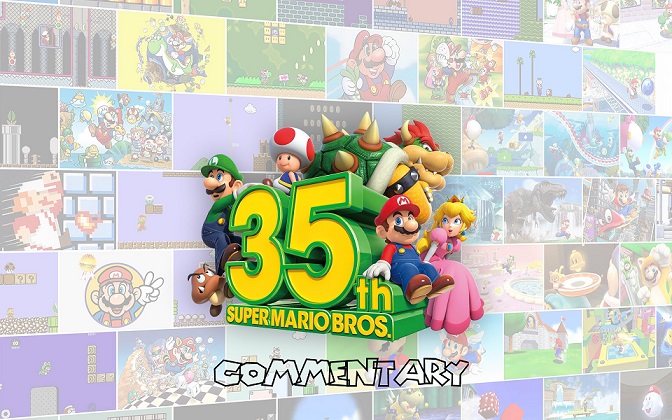 Super Mario Bros 35 is a limited time online multiplayer battle royale 2D game on the Nintendo Switch, available only until March 31, 2021. At the time of writing this, that’s certainly in the past. This game is based on the NES’s Super Mario Bros and while it may seem like a fun remake, this is really an endurance match. To start thirty-five players simultaneously play through various levels from the original game and your goal is to be the last player standing. Every player’s screens and their progress are visible and at any time, and as long as the player has coins they can use an item Roulette to possibly help them. That will not be easy as each enemy you defeat is sent to the screen of another player, which in particular you can determine or leave random. There is also a timer always counting down that will end your run if it reaches zero. Of course this free game is only for those with a Nintendo Online subscription. So.. not free. Or is it?

So was it any good?
Yes, for a quick run or two. Let’s go back to what endurance aspect. Most players drop out really quick (like pathetically quick) even while the easier levels are being queued up. It’s not easy to understand how the levels are served at first so let me briefly explain. Before a match starts you can choose a level to play, though you will only have 1-1 at first. You’ll have more to add to your ‘vote’ in the item pool after you clear a level at least once. From then the levels are coming up in a pattern. Warp zones let you skip around just a bit. Realistically you primarily played either really early or really late levels. Few in between. I swear the athletic levels were the bane of my existence assuming I didn't have an item!

The verdict:
When the game was active I won a few times and if not that, placed top three no issue. That’s disconcerting when I’m not particularly skilled. That was always my issue. The premise of the game, thirty-five players playing SMB1? It never happened. Within a minute or two every match is basically between maybe five or so decent players while everyone else has already died in 1-1 or 1-2. It came down to not making dumb mistakes, not getting stuck in the harder levels towards the end, having enough coins to spam your roulette if you need, and defeating multiples when there’s a horde of bad guys at you. That last point specially after they altered the timer to be more aggressive. There were unlocks and levels in the game but it literally does not matter now, so I won’t even give it its own section... Anyway, happy 35 anniversary, Mario! I think.