Paper Mario is awesome, but not all of the games have retained the exact same level of paper cutout greatness. Inspired by this old chart off of Reddit, here I will go over all of the changes listed above and some others not shown. Super Mario RPG is included on the chart, but we will skip that part, that game’s aesthetic not meant to match the others. Immediately you might see a pattern: Paper Mario 64 has it’s own style. The Thousand Year Door and Super Paper Mario are nearly identical. and Sticker Star often redesigns yet again, except when it doesn’t. What I find just as interesting as what changed between games is what did NOT change.

Mario: In 64 he has a simplified style to fit in with 'story book'. There are differences between his art and in game sprites. In TTYD he’s made to look like how we think of Paper Mario today, more focus on 'paper' but still refining what was there before. SPM keeps that but it is a slightly sharper image. Sticker star changes only the smallest thing, like his gloves and adds a felt like texture to him, but only in concept art. Color Splash adds the white outline. It is worth nothing that he has new animations depending on the game, such as dancing in the newer games. 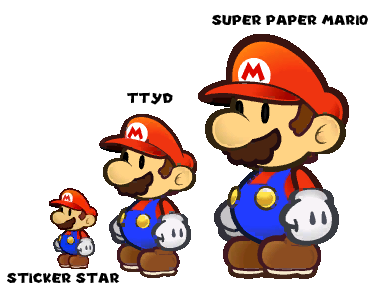 Peach: A close story to Mario. Later we get small differences in dress for example.(See bottom image)

Bowser: He might have some of the least changes spanning across all the games. He was pretty stylized from the start with a consistent appearance until Sticker Star and Color Splash added detail to his spikes. Paper Jam however the spin off reverts to his old look surprsingly, and yes that game is post-old Paper Mario so I wonder why they did that.

Goomba: Stylized in PM64 and cleaned up just a bit for TTYD and SPM. SS darkens their skin, thins out their eyebrows to match 3D renders of the mushroom enemies and doesn’t exaggerate the eyes as much.

Koopa: Ahh! My eyes. Sorry, I was dazed for a moment because I lost my shades. In all fairness, the glasses in the older games meant that they were ‘bad’ koopas, or in SPM case, the ones that worked for Count Bleck.

Dry bones: This is where things get drastic. The completely stylized Dry bones is changed to a design that pretty much perfectly resembles their 3D game render. A bit disappointing.

Hammer bro, boomerang bro, fire bro: Another casualty of the 'NSMBization'. Their snouts are shortened like their 3D versions. For Hammer bro the color of his helmet is made to match. Their eyes are less cartoony and they just seem a bit more serious.

Magikoopa/ Kamek: Remains close. Remember that SS has no magikoopa enemy but Kamek, except Kamek has always appeared to be a generic blue magikoopa. (And yes in Japan Kamek and Magikoopa can be synonymous.)

Buzzy beetle: Another drastic one with a distinctive Paper Mario only style that was stripped away in Sticker Star to look just like NSMB. It was always a little strange that the old design as one toe nail on the entire foot..

Clubba/ Spike: Clubbas are in the older games but the newer only have Spike. We can’t make a comparison yet.

Bullet Bill: Loses some cartoony features like larger eyes and given more detail around the arm.

Piranha plant: Almost the same except detail on the leaves. Also whiter teeth, so someone gifted it some dental care at some point.

Fuzzy: Remains close enough, including the crooked eyes. (This is worth noting because other enemies with strabismus like Whomps have that design element stripped in modern times.)

Rocky wrench: A comparison here isn’t exact but notice that they lose the distinctive Paper Mario glasses. However the style is noticeably cartoony still.

Wiggler: A story you’ve heard before. He sheds the stylization to look straight out of NSMB.